Newbie razorguy recommended to the team by Roarke

“Perses” isn’t so much a name as it is the latest facade which this humble ronin (rogue) hides behind. To any outsider it would seem that Perses is deliberately ominous and vague when asked about details of his life, but anyone who truly know him (of which there are none) would tell you a different tale.

“Perses”, who has also been known as “Kenji”, “Tsuwamono” or just “Tsu”, and last but not least “Grand Master Slash”, has had but a brief existence. Although he reckons he is somewhere in his mid-twenties, his memory only extends back five years. His life began with the blossoming of his first complete memory, which coincides with longest running continuous conscious awareness.

He was borne into his adulthood with dishonor, awaking on the floor of a cheap hotel room. The room was dark, but the bright neon light outside the window painted the room in even darker shadow. The pain coursing through his mouth indicated that he had been seated in the nearby chair, breaking the abrupt fall with his face, his half-empty cup of tea sat with its full twin on a desolate table. In the room was also a black duffle-bag. The bag contained a pistol, foreign and cold to the touch, but somehow this genin (peasant) knew how to load and clean it, and most importantly-use it. The memory of these skills flooded him as soon as he touched the weapon, and from that moment he was awakened to the notion that he was a killer.

As it was with that memory so was it for all memories that came back. This genin was a blank slate. No memories preceded the one that began on the floor of that hotel room, but skills and knowledge would rush to his consciousness when prompted by a trigger.

No memories, that is, but for one.

A dark shadow, a solitary tear tracing its way down a face, around a mouth red with lipstick, which whispered dolefully:

Words are wind, and memories are shadows of the past, but no memory was less meaningful than this. It recurs most often whenever this ronin pauses to meditate. It comes back, always unbidden, first like a slow misting of rain, only to rage as a deluge of overpowering force. The deluge forces its way from mere memory to the physical forefront, breaking his meditation and causing agonizing pain, not the least of which is a fire-like burning of a mottled scar on his neck which is as devoid of meaning as his name. Always the same memory, no more or less detail, but empty (kara) as the rest of his past.

The battle of Honne (inner desire) and tatemae (social expectations) are locked in mortal struggle and wax and wane as the sun (hie) and the moon (getsu). Honne dictates that he find his past, for without his past his future existence is devoid of meaning. But tatemae dictated that rice had to be put on the table, and there was only one way to do that.

This humble one did all that he knew how to do. The first few years it was petty thievery, until he tangled with the wrong victim. Fortunately for him that lead to him falling in with the right crowd, or rather, the wrong crowd.

As a hired gun, Percy moved from deal to deal with no fealty to any one but the Nuyen. Finding himself a true Ronin, when the job changed, so did the name. The preceding years had seen more name changes than the seasons could count. The only true change was in the gradual increase of memory. It came in terms of skills awakened, as if from slumber. Every asset that awakens only confirms the single Hontono mono (truth) that this genin knows: It is evident that there is a teeming knowledge that remains untapped, that, together with memories locked beneath his cold exterior, solves the riddle of who he truly is. With all the abilities that become unlocked, it is clear that he is something greater than he seems, and perhaps not so much the senpai (low student) as a kohai (master) waiting to be finally awakened from the walking sleep of this existence: A kaminotora (paper tiger) whose fangs have yet to bare. 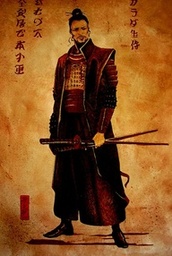